Keen to learn more encouraged her to take a degree course in Art and Design at the University of the Sunshine Coast, where several well-known artists and sculptors, including Barbara Bolt, tutored practical units. However, enrolling in 1997 coincided with the University abandoning most of its practical art. They offered instead a Computer Based Art degree, happily retaining a few life drawing and painting units, which, after her initial disappointment, Pauline happily embraced.

Since joining BLACKALL RANGE VISUAL ARTISTS Pauline's work, influenced in great part by Henri Toulouse Lautrec, William Dobell and cartoonist Emile Mercier, has centred on her interest in people. She enjoys painting them in the many humorous situations in which they're often found. Her favourite mediums are oils, acrylics. . .and the computer. 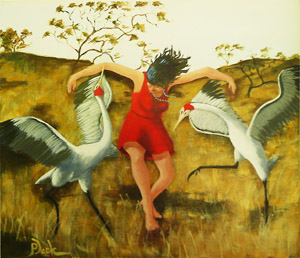