Marianne Reardon was born in Hamburg, Germany. At the age of five she immigrated with her parents to Tasmania, where she studied to be a teacher.

When Marianne and her husband moved to Montville in 2001, she started to seriously explore her long, life interest in art. It was when a friend gave her a set of pastels that her interest became an passion.

I love setting up a still life and painting it. It's like going on a journey and crossing a threshold into another world. Time does not exist, only light and shadows, colours vibrating. It's difficult to explain. One has to experience it.

She has attended many workshops in both acrylic and pastel, learning much and developing her own personal style. She has exhibited in local art exhibitions, winning first prize in the pastel section of the Maleny Art Awards and the Zonta Women in Art Competition. 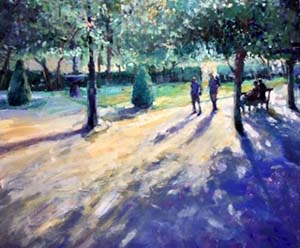